Another update - 26 of June 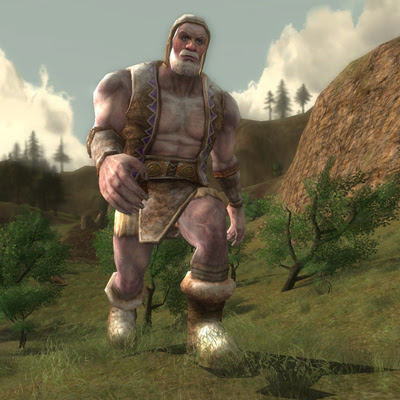 Interesting is that new mobs is added - LAGMAS - he is an orc on 33 level, of course also lost of updated items, when you are interested in details look on official, anyway some mobs where updated - i think the most updated mobs is a dragon Thorog. When its update he is always updated.

Also yesterday new type of monsters where added-Giants ( on screen ) there are 60 feets tall and have great powers, there were mentioned in Lord of the Rings book but in Lord of The Rings Online : Shadow of Angmar they are very important.

Their destructive force will be great and i think they will be interesting - Raid, enemy.

Also on 25 june was update, small one after big one on 24 of June where very much where added like Drake Matron mobs or big list of items.

Popular posts from this blog

September 06, 2011
Lord of the Rings Online, Rise of Isengard won Best Expansion award of E3 2011! With strong player base, free to play model making game open for fans we should wait for more expansions for this amazing massively multiplayer online role playing game.
Isengard is the third expansion for LOTRO and brings some great content and features to gamers. For a game that has been around as long as it has, it is exciting to see such an amazing expansion come to the forefront for us - gamers. The idea of “mobile quest givers” alone is worth it for MMO fans as companions join your crew to give you quests as we go. Turbine is really pushing the story aspect here for LOTRO and giving us the ability to make a difference in Middle Earth. Not only that, but everyone will have access to LOTRO’s monster play which allows gamers to jump into PvP as monsters in the game. A hardened veteran of MMOs, LOTRO is serving up some exciting content with this expansion.

December 30, 2009
Welcome friends on my Lotro Blog! According to tentonhammer.com, Lotro Siege of Mirkwood expansion, has won best MMO expansion award!Siege of Mirkwood offers players the usual gambit of content one can expect of an expansion. It includes new quests and new zones and dungeons, a level cap increase, and new raids.

Tentonhammer crew is really amazed by the Skirmish system which is the most fun ideas we've seen in the industry this year. You should know that in Skirmish, we can create and lead our own soldier in randomized instances. The soldier can be trained and is receiving experience points. Joining a skirmish is very easy and provides quick and fantastic entertainment. As an added incentive, purchasing Siege of Mirkwood also includes all previous expansions and content updates.

April 22, 2010
Welcome today about quite interesting skirmish changes, checkthem out.

1) Item wear on defeat has been reduced while inside Skirmishes.

While individual results may vary, we feel overall Skirmishes are providing a reasonable amount of rewards. For patch one, they wanted to take the step of reducing the amount of lotro gold lost when killed in a Skirmish. They believe this fix will not change the end amount of gold we can achieve. It’s not bad idea, because after introducing Skirmishes, you really need a lot of gold. I’m waiting for other changes in the future anyway!

2) The monster kill XP buff inside Skirmishes now has a buff icon associated with it.

The Skirmish Monster Kill XP buff will remain in effect until the release of Volume 3 Book 1.
If you will monster in Skirmish you will receive more 25% XP then landscape. According to Turbine, this 25 % bonus was not needed and has helped make Skirmishes a bit too efficient vs. other game play styles (ehhhh whatever…). That’s why they c…
Read more